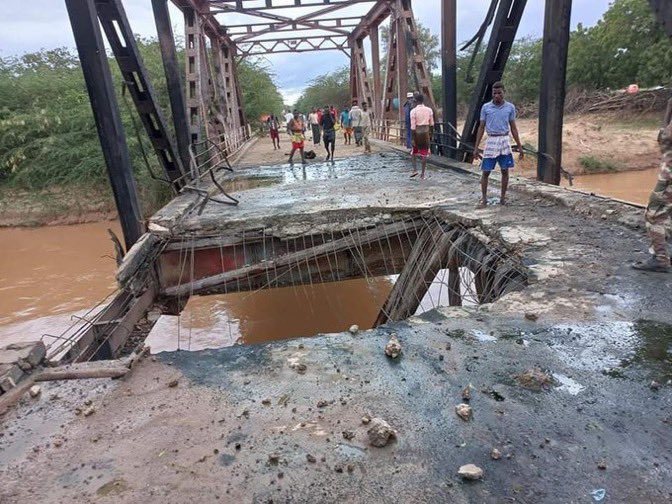 Al-Shabab has targeted two strategic bridges in the towns of Buuloburde and Jalalaqsi that are located in the central and eastern regions of Hiiraan.

Hiiraan has been on the forefront of President Hassan Sheikh’s “all-out war” against Al-Shabab in the country following the deadly siege in Mogadishu that lasted over 30 hours.

Al-Shabab militants successfully managed to drive a bomb-laden suicide vehicle on to the strategic Buuloburde bridge, partially damaging the bridge. Within the same twenty-four hours, a suicide bomber driving another bomb-laden vehicle attempted to attack a strategic bridge crossing in the eastern town of Jalalaqsi which was curbed after security forces shot the drive before he could reach the destination.

This all comes at a time when Al-Shabab is on the backfoot in Hirshabelle as the Somali National Army alongside local militia known as ‘Macawisley’ have liberated large swathes of lands across Hiiraan and Middle Shabelle in recent weeks.

Since operations begun nearly two months ago, dozens of towns and villages have been liberated in the Hiiraan region with hundreds of militants killed during these operations as well as numerous makeshift courts and extortion centres in the region destroyed.

Currently, the militants are only present in a few pockets of Hiiraan, particularly in the Moqokori region.

It was earlier this month when militants conducted a series of suicide bombings in regional capital of Beledweyne that killed over twenty people including senior state government officials in an attempt to damage Somali moral to no avail.

Reports emerged within a day after the bridge attacks that locals were already in the process of rebuilding the bridge as they remain determined to keep this battle going.

Despite the bombings and damages inflicted by the militants, it seems as though the people of Hiiraan continue to be resilient and persevere against the violence of terrorism. In the past, such attacks would have instilled enough fear in the local population however it seems as though Somalis have finally freed themselves from the mental shackles of fear.

The U.S. government has also expressed its support to help build bridges and infrastructure damaged by the militants as the war wages on.

“The United States and #Somalia will continue to work together to build bridges. Al-Shabaab has clearly shown that it is only interested in attempting to blow them up.”

The Somali National Army (SNA) have made a number of gains in the Middle Shabelle region in recent weeks. On Tuesday, the 27th Division of the SNA liberated numerous towns including Yaaqle, Mukadheere, Dhagahoow, Kooraabe, Shanloow and Farbaraki that are all under the Bal’ad district, killing or capturing over 70 Al-Shabab militants.

Similarly, an ambush by SNA alongside local militia against militants near the village of Halfooleey saw dozens of Al-Shabab militants killed and their armed vehicles torched.

Indeed, recent gains are indicating that the SNA is closing in on the Al-Shabab stronghold of Masaajid Cali Gaduud in Middle Shabelle. We previously Al-Shabab propaganda footage showing armed civilians that the militants claimed would help them defend the region. An SNA victory could mean the end of Al-Shabab in Hirshabelle.