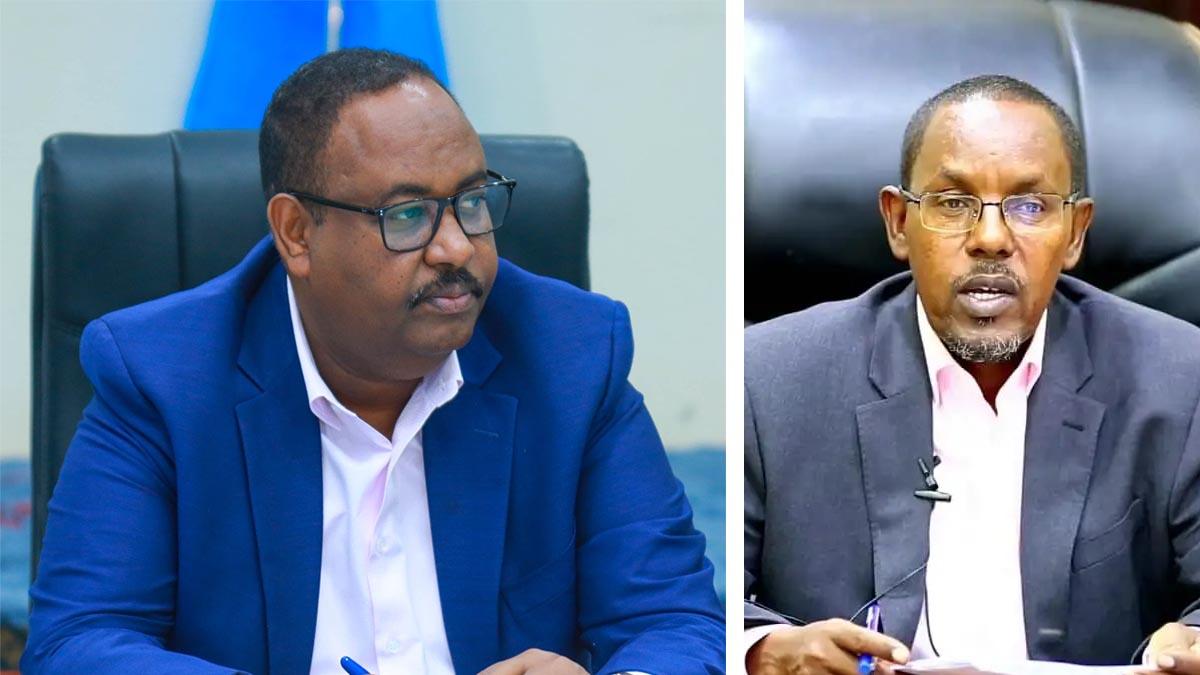 Deni came into office utilising an old alliance with a powerful yet secretive politico-business group in Puntland State known as ‘Aaran Jaan‘. This group has exerted extensive power and influence in the Federal State for more than a decade, particularly following the election of key Aaran Jaan ally, Abdirahman Faroole back in 2009.

The alliance between Said Deni and Aaran Jaan would remain strong for three years as both parties benefited from the politico-economic alliance:

However, all these plans would fail cataclysmically as Said Deni failed to secure the Presidency of Somalia and now he has turned his wrath towards Garowe. Facing an increasingly unhappy political elite in Puntland, his legacy in jeopardy as well as a looming State Presidential election, it seems as though State President Deni has taken another political leap in an attempt to ensure his position remains tenable.

Deni has taken a political gamble, attempting to take all the chips from the table, while removing former allies turned foe, Aaran Jaan from the political equation.

A Look Back: Relationship between Deni & Aaran Jaan

Prior to politics, Said Deni was a businessman and a school principal. At some point during the early 90s, Deni would join a Muslim Brotherhood affiliated group in Somalia known as Al-Islaax and was a leading figure in its North Eastern branch during that period. He would go on to be one of the founders of the major Somali corporation, Towfiiq Group which is based in Bosaso. He would also fund the first Imaan Nawahi school in Bosaso which he would head as principal for a number of years.

An important element to note is that Deni’s relationship with Aaran Jaan goes back nearly two decades to the early 2000s or even as early as the 1990s. Firstly, Towfiq Group was founded by Deni alongside other key influential Aaran Jaan members including Mohamud Shiddo and Faarax Dheere who would be killed by soldiers loyal to Puntland State President, Abdullahi Yusuf in 2001.

The formation of this new alliance throughout the 1990s came about due to aligning business and political interests as the State of Puntland was being formed and the North East region of Somalia would enter a new chapter separate from the rest of the country and much like their Northern Western neighbours, region of Somaliland.

The first known role in regional politics came with the disputed election of short-term Puntland State President, Jama Ali Jama in Bosaso. During this period, a political dispute arose regarding the term extension request by the incumbent State President, Abdullahi Yusuf which was initially rejected by some political stakeholders in the newly formed Puntland State. This resulted in Jama Ali Jama being declared President in Bosaso for only 9 months.

In this new state government, Deni and his new group were represented by the now de-facto leader of Aaran Jaan, Mohamud Shiddo as the Puntland State Minister of Finance.

To quantify the close relationship between Deni and Aaran Jaan: Deni’s Masters course in Malaysia was sponsored by Towfiiq Group which Mohamud Shiddo serves as a board member. Upon his return, Deni would serve different roles in Towfiq Group, earning a lot of his wealth during his tenure there.

Deni had various support from numerous political actors including former Puntland State President and key Aaran Jaan ally, Abdirahman Faroole, key Aaran Jaan member, Farah Ali Shire and the then incumbent State President, Abdiweli Gaas who was eliminated in the early rounds. Furthermore, Deni would receive support from political groups outside Puntland State including Somaliland State, which is reported to have contributed $1M to Deni’s campaign as well as Damuljadiid, Deni’s former allies in Mogadishu led by Hassan Sheikh Mohamud.

Deni also received support from his direct former business, Towfiq as well as another company called Saracen. Interestingly, Aaran Jaan strongman, Mohamud Shiddo is reported to be a board member of both companies.

In fact, the level of influence from Aaran Jaan was so great that it is reported that Mohamud Shiddo obtained $2M from allies at Dahabshiil on behalf of Said Deni’s election campaign.

This money would be used to buy out MPs in the Puntland State’s House of Representatives with some reports suggesting Deni paid as much as $50K per MP to gain their support.

It is clear that all these factions had their own political and business interests at heart to ensure a Deni victory in 2019.

For Aaran Jaan, the group has been influential since Puntland State President, Abdirahman Faroole. While they supported his re-election in 2014, Abdiweli Gaas would become victorious. Despite this, even during this period, Aaran Jaan managed to infiltrate Garowe and obtain various business contracts from the Puntland State government for their businesses.

Under the Deni state government, the plan was to have an Aaran Jaan and Deni administration however it seems as though the alliance is falling apart as fast as it came.

What has caused the current political rift?

To understand how the most recent rift between the political party led by Deni known as Ka’ah and Aaran Jaan grew, we have to look at a number of events:

Deni and his party suffered a major defeat in the first direct elections held in Puntland since its creation in 1998. However, despite the result, the election was smeared by voter fraud and corruption among other things.

Despite these accusations, the Puntland Development and Research Centre (PDRC) failed to release a statement that outlined failures made by the Puntland State administration in its first test to hold 1P1V election. The PDRC is one of the organisation that oversees the transition in Puntland State from Indirect to Direct election.

In fact, opposition parties accused the PDRC of failing to fulfil their legal responsibility and instead being biased towards Puntland State authorities and the ruling party.

The dispute over the election would ultimately result in the chairman of the Transitional Puntland Electoral Commission chairman, Guled Salah resigning due to the political dispute over the results.

Ultimately, it would take more than 160 days for the administration in Garowe to accept the results of the election and allow elected officials to take their roles.

This political mayhem would result in over 30 people being killed under mysterious circumstances.

Deni would suffer a major political defeat in Mogadishu as he competed to win the Presidential election on a Federal level.

Deni would play a key role in politically cornering and weakening the then President Mohamed Abdullahi Farmaajo with his alliance with Jubaland’s strongman, Ahmed Madobe.

He would form alliances with opposition leaders to form the Badbaado Qaran group that would eventually wage war in Mogadishu last year to topple the Federal Government to no avail.

Deni would also handpick senators that would represent Puntland and had heavy influence in the appointment of clan elders that would eventually vote in MPs for the Lower House of the Federal Parliament, essentially laying the groundworks for his election in Mogadishu before declaring his bid to run.

Interestingly, it is reported that Deni had an interest to run for President way back in 2009 when he convinced his clan that he could obtain the minimum role of Premiership of Somalia. He would attempt to run for the Somali Presidency in 2012 but failed. Instead, he obtained an MP seat in the House of the People. He was one of two candidates picked for the two parliamentary seats representing his clan.

During his tenure as an MP, Deni would consistently be ranked amongst the worst attenders of Parliament. Deni was ranked 7th least attending MP in Parliament between 2012-2016, having only attended 27% of Parliament sessions. He would again attempt to run as President of Somalia in 2016-2017 periods but again failed.

His defeat in Mogadishu in 2022 would become his worst defeat yet, detrimental to his vision which has been in the works for over a decade. Deni suffered the most financially and politically out of all candidates this year.

The defeat in Mogadishu created a more ruthless, impatient and vengeful version of Deni which explains his intention to single-handedly take control of the Puntland election.

It seems as though Deni will stop at nothing to ensure he runs for the Somali Presidency again in 2026. A two year extension could push his term end date only a few months away from the Federal Presidential election which is expected to take place in 2026.

Publicly, there have been a number of heated exchanges between Said Deni and Aaran Jaan in recent weeks which showcase the extend of the animosity between the two sides.

During a speech last month in Garowe, Deni accused Aaran Jaan of being a group that wants to singlehandedly run Puntland State. He said that this group came into politics for the sole reason of business and earning money from public office. This would be the first political projectile thrown at Aaran Jaan by Deni.

Conversely, key Aaran Jaan associate, Puntland State regional MP, Ali Xoosh accused of “being greedy and salty” because his plans did not succeed both in Mogadishu and Garowe.

In attempt to remove his new foes from office while simultaneously appeasing new allies, Deni began a reshuffle of his government and security apparatus. Key Aaran Jaan associates including Puntland State Minister for Finance, Hassan Abgal, Deputy Minister for Livestock, Abdiweli Said and the Minister of State for the Presidency were axed. All were known friends of Aaran Jaan strongman, Mohamud Shiddo. We also saw the resignation of Deni’s Deputy Chief of Staff, Abdiweli Timacadde.

Many have accused Deni of having trying to hijack the State Presidential elections via a highly controlled 1P1V that benefits him. The resignation of TPEC Chairman Guled Salah signifies a rift between the independent electoral body and Garowe. Some analysts have suggested State President Deni was infuriated that the TPEC was not acting in accordance with his vision of a 1P1V system. In fact, some reports go so far as to say that Deni shifted recourses and support from the TPEC to the Puntland State Ministry of Interior led by newly appointed Minister and key Deni-ally, Abdi Farah Juxa.

To make matters worse, Deni recently appointed a new Ministerial Committee called the ‘Election Acceleration Committee‘ which is comprised of mainly Ministers that are members of his political party Ka’ah.

Additionally, to counter the political influence of Aaran Jaan, Deni has begun attempting to appease allies of the group. The appointment of Faroole’s cousin as State Minister of Planning indicates that Deni is still attempting to appease some groups within Aaran Jaan. Additionally, it also reported that Deni has been buying support from former opposition politicians as he attempts to gain support for his vision. We saw in September, the appointments of dozens of new Military officials and government posts.

Senior Puntland officials including former Presidents have all called on Deni to stick the current framework which is indirect.

They have argued that there is not enough time left to deliver 1P1V that is equally accepted by all political factions within Puntland.

The results in the three districts, coupled with the aftermath of that election including delays, the resignation of the TPEC Chair, the refusal of the PDRC institute to release an independent report as well as the appointment of a new Ministerial committee composing of key allies to deliver the election indicate that the 1P1V election envisioned by Deni is not one that sees a victor aside from himself.

Deni is not wrong about Aaran Jaan, but it is clear that Deni plays a game of slimy politics and will sign a deal with even the devil only to betray him to get what he wants.

The reality is that Somalia and Puntland are violate regions that prone to violence if there is not a political consensus among political actors.